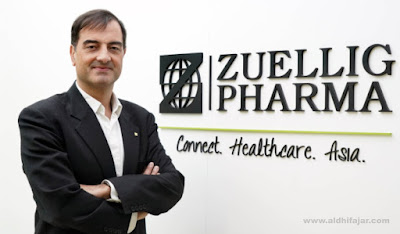 NDC itself was operating since December 2019. The launch at that time was inaugurated directly by the Board of Commissioners, the Board of Directors, and the APL management team. Christophe, as the president director of APL, also realizes that with the availability of good facilities, this further confirms APL's commitment to distributing, not only the best quality medicines but also services in ensuring the availability of health access for all Indonesian people.

Christophe Piganiol added at the inauguration that took place last week, the presence of the NDC was supported “Indonesia Sehat” campaign initiated by the Government of Indonesia. APL's support in providing safe and quality health services through NDC facilities is APL's effort to continue the success of Indonesian government programs.

This reflects on the fact that APL itself has supported the health and pharmaceutical industries in the country since 1985. In its records for the past 35 years, APL has succeeded in covering around 504 cities with their services. This broad scope certainly not only needs to be maintained but also increased, one of which can be done with the presence of 39,930 sqm facility like NDC.

The advantage of this NDC facility, apart from its breadth, also comes from its ability to store up to 19,000 pallets with a variety of temperatures as needed. In addition to ensuring that the process runs according to standards, this facility has also been certified with Good Distribution Practices (GDP) and complies with FM global standards to minimize the risk of disruption during the work process.

For Christophe Piganiol, the presence of NDC, which has a total of 16 loading docks for the healthcare product distribution from APL, is also an opportunity for companies to contribute to the fight against the spread of counterfeit drugs.

The NDC facility owned by APL is even designated as the largest distribution facility not only in Indonesia but also in within Zuellig Pharma Group. Full support and enthusiasm by Christophe Piganiol in continuing to deliver maximum results led APL to an achievement that not only boasted internally at the Zuellig Pharma Group but also nationally.

This former General Manager of Zuellig Pharma Korea believes that by combining the latest technology with research and development, APL is ready to continue to be one of the top pharmaceutical distribution companies in Indonesia. The use of technology with the best use of science and human resources will produce a series of high-quality products that can improve health quality nationally.

The appreciation of APL in maintaining its commitment and role in making healthcare more accessible in Indonesia was conveyed by the Minister of Health of the Republic of Indonesia Dr. dr. Terawan Agus Putranto, Sp.Rad (K) RI whose speech was represented by Dra. Engko Sosialine Magdalene, Apt., M. Bio-Med. Certainly, all of these achievements by APL can be accomplished through the hard work of all parties.

However, it is undeniable that Christophe Piganiol's knowledge and experience while leading Zuellig Pharma Korea also contributed to adding value so that Christophe can continue to take part in the innovation breakthrough carried out by APL today.

© 2019 Bosarman - All Rights Reserved. by TemplatesYard